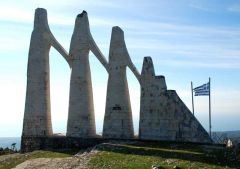 The historical term Zalogo located north of N. Preveza Kamarina village at an altitude of 650m.
In December 1803m.Ch after treaty Ali Pasha concluded with Souli, residents of Souli Souli left.
They were divided into three groups, one of which was directed towards Zalogo.
Ali Pasha failing in his word ordered persecution and extermination of Souli, the Turk-Albanians chased after them Souliots managed to trap them at the top of the sera monastery of Archangel Michael.
Several were captured, another escaped Parga and a group of about 60 women with infants their hard working not to fall into the hands of the Turks and raped first threw their babies, hand in hand caught and shattered in Canyon terms.
The women of Souli heroic act remained in history and dance Zalogo and honored worldwide in 1961 after the inauguration of the famous monument Zalogo work of the late George Zongolopoulos and architect P.. Karantinou.
The monument has a length of 18m, height 13m and is lined with some 4,300 limestone blocks. zallogo video

The accessibility of a monument depicting female figures holding each other hand in hand made from 410 paved steps starting from the monastery of Ag. Dimitrios