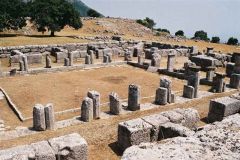 Ancient Kassiopi was the 4th eg eon from Kassiopi, a tribe of Epirus Thesprotia, on the southern slopes of sera Zalongou.
He showed particular growth in many areas ground to its strategic position and trade flourished economically and politically.
The population is estimated at 5,000-10,000 people engaged in farming, agriculture, fisheries and subsequently with maritime commerce and crafts.
It was one of the largest and most organized cities of the continent, with great views and very well fortified had urban planning, elaborate houses ......, sewer, mint, pottery, market, and many public buildings, one of which the great theater that certain sources calculate the capacity of a 5.000 to 6.000 positions.