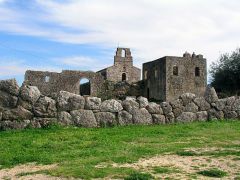 The most famous Necromancy in Ancient Greek history is the Oracle of Acheron.
Located in Mesopotamia village on Xylokastro NW Butte Acherousian lake which was the entrance to the underworld, which was formed from the membership Acheron rivers Kokytos and Pyriphlegethon.
Homer's Odyssey describes in detail the position of Necromanteio (rhapsodies k, l) during the descent of Odysseus into Hades.
In Nekromanteio come those wishing to consult the dead for the future.

Guests after offering libations to the priests of the oracle passed a series of psychophysical test hard working contact with the souls of the dead and to get the information they wanted.
Access to Oracle was the sea by boats (Ionian Sea) Today's Beach and then by using the floating Acheron and Acherousian lake.